The escape tunnel for a new Moscow Metro line was constructed using the so-called “cut and cover” method.

First, sheet piling was driven down to a depth of 28 m and then connected to the existing Metro tunnel. The subsequent concreting work took place at temperatures as low as -30°C. Two basic problems occurred under these difficult conditions. Firstly, there was probably an ice layer on the sheet piling at the time of concreting the walls which did not just prevent adhesion of the concrete, but resulted in a separating layer of 1 cm thickness. Secondly, the concrete had stiffened so much at the time of pouring despite frost protection measures (deicing salt as additive) that huge voids and flaws were formed.

Once the tunnel was complete, major water intrusions which then led to destruction of the building fabric in the frost periods were noted after rain and after the thaw period in spring.

The first approach was injection using cement. However, since the pressure of the discharging water was so high, and also because a certain amount of water flow between the sheet piling and the actual concrete wall was discovered, the idea was quickly discarded.

A proposal was then made by TPH and the contracting partner in Moscow to use injection for water-stopping and stabilising purposes.

The idea was implemented using a 2-component PUR foam resin. This product is capable of stopping water with extremely high flow, filling up voids and providing friction-bonded adhesion.

Packers were placed around the largest flaws and above the entire wall. The areas with water discharge were injected first, followed by the entire wall area. This meant that the sheet piling and the concrete wall were retrospectively bonded together, the water was forced out of the structure and the voids in the concrete were filled with friction bonding.

The work was carried out using a uniform flow 2-component pump with static mixer. 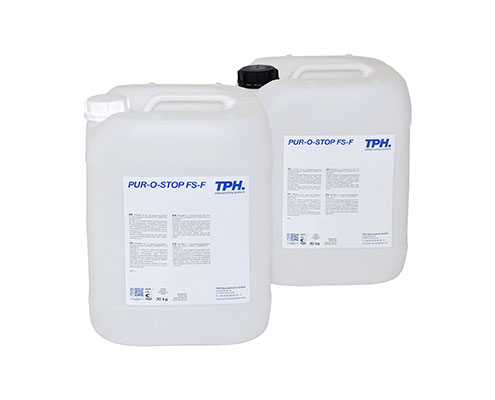 Extremely fast reacting, from ridged to tough elastic, 2K polyurethane resin, which foams up in contact with water