The station tracks in Königslutter carry ICE express trains to and from Hanover in addition to regional trains. During renovation of the station, access to the platforms suitable for handicapped persons was to be achieved. The platforms were to be reached via a lift, and for this purpose precast concrete shafts were to be connected next to the existing access.

To do this, soil was excavated and the resulting pits were secured with structural timber. Unfortunately, support using structural timber was not very successful. The German Railways construction supervisors discovered that there was a substance hazard only a few metres away from the rail tracks.

The tolerance in this area is, however, only a few millimetres. The works were then suspended and an engineering office was commissioned to plan suitable measures.

The engineering office made the decision to carry out soil stabilisation, whereby the HDI and ice freezing methods could not be used because of a lack of both time and space.

The planners decided to use a so-called “hard gel” on the basis of polymethyl acrylate, which has an extremely low viscosity (approx. 12mPas) which means that it can also penetrate fine sandy soils, and also has a solid-elastic consistency after reaction and offers a high compressive strength in combination with the soil material.
The injection company commissioned carried out the work from the existing platform accesses and drove injection lances up to 2 m into the soil in the areas to be excavated.

These were injected in stages with the hard gel and then also retracted in stages to ensure that a homogenous gel/soil body resulted.

The injection team consisted of 4 persons and 2 injection devices. The work took 4 days in addition to a further day as emergency backup during the actual excavation. The company’s equipment was brought to site in 2 transporters.

Excavation of the soil material was then carried out using normal excavators since the strength of the gel/soil mixture was less than that of cement. 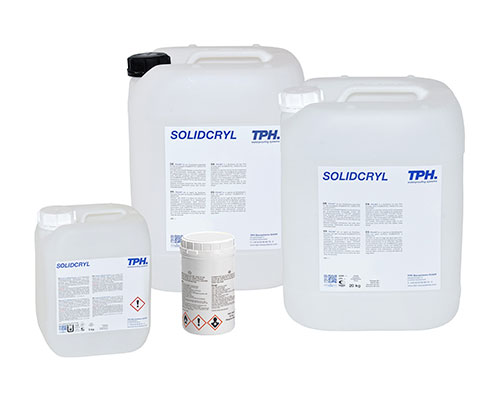