The U 5 underground line in Berlin, which was constructed in several sections from 1996 onwards, crosses underneath the River Spree in the immediate vicinity of the parliament building at around 30 m below surface.

The tunnelling work had to cease in this section because the so-called shield tail seal, the S1 seal, failed due to wear. This seal can be implemented as an inflatable rubber seal or as a grease-injected brush seal made of steel brushes. The seal has the task of creating a seal between the trailer of the tunnelling machine itself and the last-placed lining segment against water ingress from outside. If this is defective water can permanently enter the tunnel, and even worse, soil material which the pumps can no longer transport away can be washed in.

Tunnelling was therefore interrupted so that the seal could be temporarily repaired. Unfortunately, the seal could only be replaced if the towing machine was driven forwards, in other words out of the protection of the last lining segment. Due to the permanently pressing water at a pressure of around 3 bar coming from the River Spree in the vicinity, in addition to the problem of the so-called “Berlin Soil” (almost uniform grain size, in other words extremely flow-capable), a stabilising seal had to be formed around the entire tunnel at the interface between trailer and lining segment.

The standard methods such as ice freezing or HDI injection could not be used for reasons of time in this case, because the machine had been standing still for several weeks which meant that the cost plan and schedule were considerably outside the proposed limits.

An engineering office was instructed to find a rapid solution. The office proposed injection from inside the machine, in other words a type of consolidating curtain injection. Due to the very high in-situ water pressure and the water quantities existing, only a material which could not be displaced or dissolved by water could be considered. A foaming product was also unsuitable since it would only displace the soil but not fill it.

The agent selected was a silicate resin which penetrates and consolidates the soil irrespective of water presence, but also without bonding the machine so that it becomes “glued” and is no longer capable of movement.

The company carrying out the work drilled 3 radially-aligned packer rows left and right of the area to be consolidated in the lining segment and trailer at a packer spacing of 50 cm. Around 17,000 L of silicate resin was injected. After conclusion of the work, the machine was able to run forwards by around 60 cm without problems. The seal was then replaced by a brush seal. 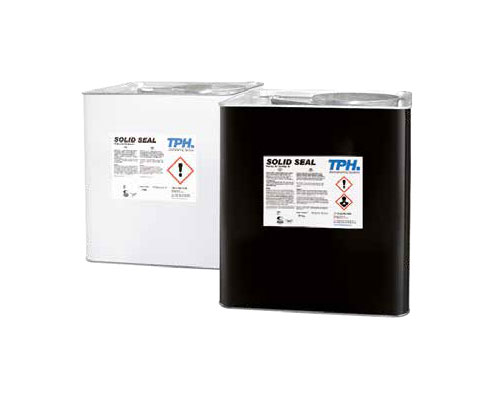